A drone can be a great way to spend your time and a hobby that can drastically improve your skills.

People use drones for different things, and they either make you a fantastic photographer, a spectacular racer, or a tremendous travel vlogger. However, these things can only be achieved if you cross your beginner level, which can only be done by learning to control your drone more effectively.

Well, it’s time to buckle up your seatbelts because you are going to learn to control your drone better.  Flying a drone in the air is like driving a car with no directions; at the beginning stages, it may seem too complicated, but in time you shall become an expert. Start by making some simple moves and keep the drone in sight.

It is always preferable to start by practicing in a large open area. Begin by just some simple taking off and landing. As you push your left stick a bit forward, you may notice that your drone lifts itself slightly, and when you pull the same stick towards you, you will see that it starts to descend. Just a simple ascend and descend practice is enough at the beginning, do the same thing two to three times, and once you gain confidence with it, you can start hovering it in the air.

To hover your drone, you need to apply pressure on your left stick consistently. It is recommended that you keep your drone at a low altitude. Try rotating the drone by pushing the stick towards left and right. If you want to land, your drone follow the simple steps mentioned above.

A drone’s controls are quite sensitive; a slight movement of the stick has a significant effect on the drone’s movements, It is a bit tricky,  begin by moving the right stick of the drone slightly forward while the drone is hovering. You will notice that the drone moves forward and vice versa. Practicing a couple of times will give you the hang of it. Then move the right stick left and right; you will notice the drone reacts by going towards left and right, respectively. 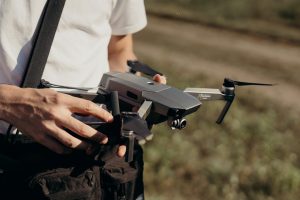 One thing that makes you want to scratch your head is the front-facing of the drone. To know where the drone’s front is and which direction you want it to while hovering, you may want to rotate your drone before the flight in a simple 180 degrees. When you rotate your drone in 180 degrees and move your right stick towards the right, it will make your drone go towards the left. Proceed by keeping your drone at different angles and also ascend and descend the drone. Practicing it for a couple of times can give the hang of it.

Once you gain confidence with both left and right sticks, you may now use them both together. Practice by making simple patterns and fly around different objects such as a single tree, a pole, etc.

Once you get the basics down, you can now start going for long distances but always remember to learn the rules of the local authorities present in your area.

So that’s it for the drone controlling lessons. Remember to follow all the safety instructions, and you will be alright. Practicing to fly daily will give you a better handle on the controls, and at the same time, you will learn a lot about your drone.

beginners guide to flying a drone drone controls drone flying drone for beginners drones how to control a drone how to fly a drone
September 22, 2020